Microsoft recently blogged about the Recent Nation-State Cyber Attacks that have impacted high-value targets both across the government and private sector. This attack is also known as Solorigate or Sunburst. This threat actor is believed to be highly sophisticated and motivated. Relevant security data required for hunting and investigating such a complex attack is produced in multiple locations - cloud, on-premises, and across multiple security tools and product logs.  Being able to analyze all the data from a single point makes it easier to spot trends and attacks. Azure Sentinel has made it easy to collect data from multiple data sources across different environments both on-prem and cloud with the goal of connecting that data together more easily. This blog post contains guidance and generic approaches to hunt for attacker activity (TTPs) in data that is available by default in Azure Sentinel or can be onboarded to Azure Sentinel.

The goal of this article is post-compromise investigation strategies and is focused on TTPs and not focused on specific IOCs.  Azure Sentinel customers are encouraged to review advisories and IOC’s shared by Microsoft MSRC and security partners to search on specific IOC’s in their environment using Azure Sentinel.  Links to these IOC’s are listed in the reference section at the end.

To make it easier for security teams to visualize and monitor their environments for this attack the MSTIC team has shared a SolarWinds Post Compromise hunting workbook via Azure Sentinel and Azure Sentinel GitHub. There are many things in this workbook that threat hunters would find useful and the workbook is complimentary to the hunting methods shared below. Importantly, if you have recently rotated ADFS key material this workbook can be useful in identifying attacker logon activity if they logon with old key material. Security teams should leverage this hunting workbook as part of their workflow in investigating this attack.

Thanks to the MSTIC and M365 teams for collaborating to deliver this content in a timely manner.  This document will be updated as needed.

Please note that since Azure Sentinel and the M365 Advanced Hunting portal share the same query language and share similar data types, all of the referenced queries can be used directly or slightly modified to work in both.

As shared in Microsoft’s technical blog – Customer Guidance on Recent Nation-state Cyber Attacks - attackers might have compromised the internal build systems or the update distribution systems of SolarWinds Orion software then modified a DLL component in the legitimate software and embedded backdoor code that would allow these attackers to remotely perform commands or deliver additional payloads. Below is a representation of various attack stages which you can also see in Microsoft Threat Protection (MTP) portal.  Note that if you do not have Microsoft Threat Protection this link will not work for you. 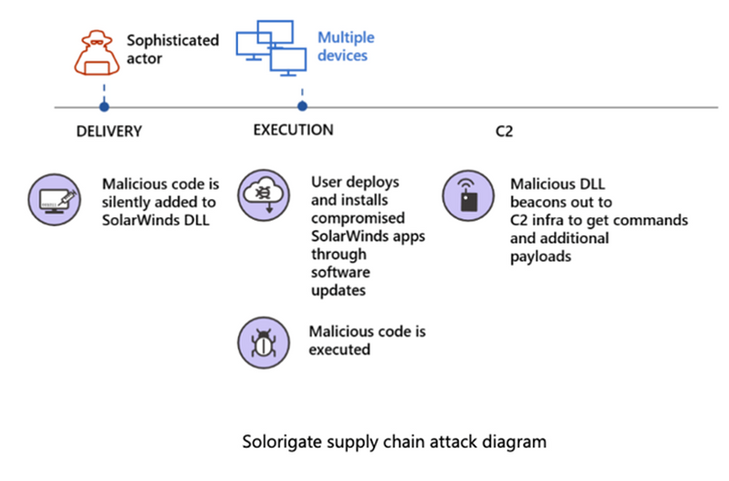 To hunt for similar TTPs used in this attack, a good place to start is to build an inventory of the machines that have SolarWinds Orion components. Organizations might already have a software inventory management system to indicate hosts where the SolarWinds application is installed. Alternatively, Azure Sentinel could be leveraged to run a simple query to gather similar details. Azure Sentinel collects data from multiple different logs that could be used to gather this information. For example, through the recently released Microsoft 365 Defender connector, security teams can now easily ingest Microsoft 365 raw data into Azure Sentinel. Using the ingested data, a simple query like below can be written that will pull the hosts with SolarWinds process running in last 30 days based on Process execution either via host on boarded to Sentinel or onboarded via Microsoft Defender for Endpoints (MDE). The query also leverages the Sysmon logs that a lot of customers are collecting from their environment to surface the machines that have SolarWinds running on them. Similar queries that leverage M365 raw data could also be run from the M365’s Advanced hunting portal.

Once the adversary acquires an initial foothold on a system thru the SolarWinds process they will have System account-level access, the attacker will then attempt to elevate to domain admin-level access to the environment. The Microsoft Threat Intelligence Center (MSTIC) team has already delivered multiple queries into Azure Sentinel that identify similar TTPs and many are also available in M365. These methodologies are not specific to just this threat actor or this attack but have been seen in various attack campaigns.

Identifying abnormal logon activities or additions to privileged groups is one way to identify privilege escalation.

Related to this attack, in some environments service account credentials had been granted administrative privileges. The above queries can be modified to remove the condition of focusing “User” accounts by commenting the query to include service accounts in the scope where applicable:

Please see the Azure Sentinel Github for additional queries and hunting ideas related to Accounts under the Detections and Hunting Queries sections for AuditLogs, and SecurityEvents

Microsoft 365 Defender has an upcoming complimentary blog that will be updated here once available.

The next step in the attack was stealing the certificate that signs SAML tokens from the federation server (ADFS) called a Token Signing Cert (TSC). SAML Tokens are basically XML representations of claims.  You can read more about ADFS in What is federation with Azure AD? | Microsoft Docs and SAML at Azure Single Sign On SAML Protocol - Microsoft identity platform | Microsoft Docs. The process is as follows:

The implication of stealing the TSC is that once the certificate has been acquired, the actor can forge SAML tokens with whatever claims and lifetime they choose, then sign it with the certificate that has been acquired. This enables the actor to forge SAML tokens that impersonate highly privileged accounts. There are many publicly available pen-testing tools like ADFSDump and ADFSpoof that help with extracting required information from ADFS configuration database to generate the forged security tokens.  Microsoft’s M365 Defender team has created several high-fidelity detections related to this. A few of them include:

Note: These detections can be seen in Azure Sentinel Security Alerts or in the M365 security portal.

Outside of directly looking for tools, this adversary may have used custom tooling so looking for anomalous process executions or anomalous accounts logging on to our ADFS server can give us some clue when such attacks happen. Azure Sentinel provides queries that can help to:

Every environment is different and some of these queries being generic could be noisy. So, in the first step, a good approach would be to limit this kind of hunting to our ADFS server.

Having gained a significant foothold in the on-prem environment, the actor also targeted the Azure AD of the compromised organizations and made modifications to Azure AD settings to facilitate long term access. The MSTIC team at Microsoft has shared many relevant queries through the Azure Sentinel Github to identify these actions.

In addition, all of these queries have been incorporated into the related hunting workbook.

Accessing confidential data is one of the primary motives of this attack. Data access for the attacker here relied on leveraging minted SAML tokens to access user files/email stored in the cloud via compromised AppIds. One way to detect this is when a user or application signs in using Azure Active Directory PowerShell to access non-Active Directory resources.

Microsoft Graph is one way that the attacker may be seen accessing resources and can help find what the attacker may have accessed using the Service principal Azure Active Directory sign-in logs. If you have data in your Log analytics you could easily plot a chart to see what anomalous activity is happening in your environment that is leveraging the graph. Note that this data type in Azure Sentinel below is only available when Azure Monitoring has been configured for AAD.

For example, below is a sample query that brings out some of the logons to Azure AD that did not use multi-factor authentication. It is possible this could produce many results, so additional tuning is suggested for your environment. This attack also used Virtual Private Servers (VPS) hosts to access victim networks. Combining the query below with data that list VPS server ranges will make this a high-confidence alert.

In relation to the VPS servers section above, the previously mentioned workbook has a section that shows successful user sign-ins from VPS (Virtual Private Server) providers where only tokens were used to authenticate. This uses the new KQL operator ipv4_lookup to evaluate if a login came from a known VPS provider network range. This operator can alternatively be used to look for all logons not coming from known ranges should your environment have a common logon source.

In addition to pre-compromise logon hunting, it is also possible to monitor for logons attempting to use invalid key material. This can help identify attempted logons using stolen key material made after key material has been rotated. This can be done by querying SigninLogs in Azure Sentinel where the ResultType is 5000811. Please note that if you roll your token signing certificate, there will be expected activity when searching on the above.

Additionally, as a cloud-native SIEM Azure Sentinel can not only collect raw data from various disparate logs but also gets alerts from various security products. For example, M365 Defender has a range of alerts for various attack components like SolarWinds malicious binaries, network traffic to the compromised domains, DNS queries for known patterns associated with SolarWinds compromise that can flow into Sentinel. Combining these alerts with other raw logs and additional data sources provides the security team with additional insights as well as a complete picture of nature and the scope of the attack.

This article was written by Shain Wray and originally appeared in the Microsoft Blog.

Take Back Your Day

Let MDS help secure your environment if your company was affected by this breach.